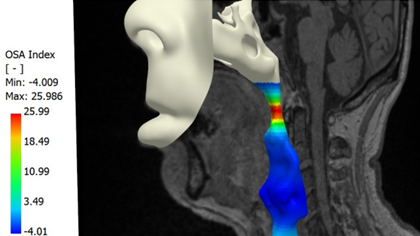 What is obstructive sleep apnoea syndrome?

An obstructive sleep apnea (OSA) consists of a brief cessation of respiratory airflow, caused by soft tissue collapse within the upper airway which is a potentially serious sleep-related breathing disorder.

This syndrome is a clinical disorder marked by frequent pauses in breathing during sleep usually accompanied by loud snoring. This can occur many times during the night and makes proper sleep impossible [1]. 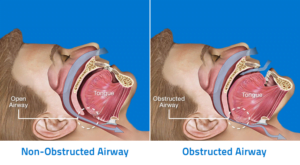 The common medical approaches for the treatment of obstructive sleep apnea include oral appliances, positive airway pressure (PAP) masks, and surgery. While PAP therapy is currently the method of choice in the treatment of moderate and severe OSA, the mandibular advancement device (MAD) is a promising alternative for mild and moderate OSA.


Numerical simulation has been over the past decade used as an efficient tool in medical applications in general to understand and to study the human upper airway in particularly by:

Simulated results were validated with experimental ones [2,3,4]. For this reason, simulation can indeed help laboratories to locate the causes to derive suitable therapeutic measures. Among these studies, a recent one [5] consisted of the development of a computational fluid dynamics simulation workflow to analyze the upper airway of patients with obstructive sleep apnea. A fluid-structure interaction simulation was applied to study in detail the behavior of compliant pharyngeal walls and an experimental setup was designed to validate the patient-specific upper airway modeling.

The geometry used (presented below) included the nose and nasal (left) and a computational model for the bidirectional fluid-structure interaction analysis based on a 3D structural model of the pharyngeal soft tissue (right).

The simulation results provided essential information about the critical region in the pharynx for the selection of appropriate treatment and readily demonstrated the effect of mandibular protrusion on the airflow in the upper airway. An OSA index was proposed and used to allow for straightforward identification of obstructive sleep apnea from the simulation results. 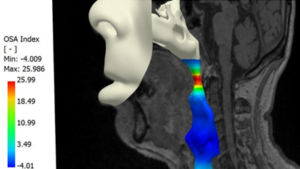 [4] Toward numerical simulations of fluid-structure interactions for investigation of obstructive sleep apnea, 2017.